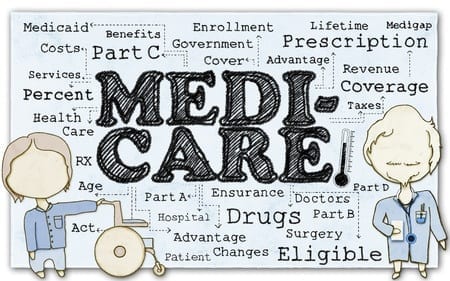 The Bipartisan Budget Act of 2018 just passed in Washington. There are many Medicare changes you should know about. It includes changes to Medicare Part-D coverage regulations, and to premiums paid by higher-income beneficiaries. There are also a few proposals suggested by President Trump, in addition to those we reported in a recent blog.

The bill funds the government through March 23rd and gets rid of spending caps that were imposed by the Budget Control Act of 2011 – for two years.

Some Medicare changes focus on the so-called Donut Hole (aka the Coverage Gap). It is when you have reached the end of your initial Medicare coverage. It starts when you reach a total of $3,750 (in 2018) and ends when the amount you pay for drugs hits another limit ($5,000 in 2018). You get a discount for drugs in the donut hole. In addition, manufacturer discounts count toward the limit that gets you out of the hole.

If and when you get through the Medicare coverage gap, you enter the catastrophic coverage phase. Then, you historically have only paid five percent of the price of each.

According to pundits, the Act reduces the Medicare beneficiary co-pay during the gap from 30 percent to 25 percent. It also increases the amount given by a manufacturer on brand-name drugs from 50 percent to 70 percent. These will happen in 2019 instead of the following year.

The plans themselves will cover the remaining five percent (Co-Pay 25 and Discounts 70=95). This is a reduction from 25 percent.

Also, biosimilars, which are drugs that have properties similar to brand-name drugs, will treated the same as brand-name drugs in terms of discounts, etc. They were not considered before.

In addition, Medicare beneficiaries with incomes of 135,000 for an individual and $267,000 for a couple will pay more for premiums.

President Trump has added his wish list to some Medicare benefits. He would like Part-D plans to share at least one-third of rebates or price concessions with beneficiaries at the point of sale.

In addition, he would like to set the out-of-pocket limit in the Medicare catastrophic coverage phase (mentioned above) by cutting the historical five percent to zero. He would increase a plan’s share of costs in this final phase from 15 to 80 percent.

Also, he proposes requiring plan to cover a minimum of one drug per category or class, instead of the traditional two.

Keep in mind that the changes are in an Act that covers the next two years and the President’s proposals are just that, proposals. They have not been voted into law.

We believe there will be an ongoing barrage of changes, proposals of changes and discussions of changes by Congress since Medicare is such a hot button. Stay tuned.